This holiday, my husband and I spent our free time geeking out over building our first gaming PC. I'd had a desktop computer when I was a kid and my dad gave me the parts to put it together, but that was a long time ago. Quang hadn't put together a computer before and he did all the research to find the right components for our price point and tier.

Here's the specs for what we built:

We don't have any cooling system besides the fan that came with the CPU and the case fan. Quang did most of the work to actually install the cards and hook up the cables. When everything was hooked up and we tried to turn it on, the box was humming but nothing showed on the screen.

The monitor was working and we verified the cable was working, but we didn't have an on-board speaker on the motherboard so we couldn't hear any beeps, and nothing was popping up. We were flying blind, so went online to troubleshoot and see if we could figure out things to tinker with before resorting to buying and waiting for a motherboard speaker to arrive.

I had read about a BIOS update issue where some Prime X370s were shipping with a BIOS that was incompatible with Ryzen CPUs, but looking at the serial on the card it didn't appear our BIOS version should have been affected. I also suspected that we were probably not passing a BIOS input check, since we didn't have a keyboard and mouse plugged in. Another article suggested that it might help to reset the CMOS, so I did that.

The magical combination turned out to be making sure our USB mouse/keyboard was plugged in, and then hooking the HDMI cable up to the graphics card HDMI port instead of the motherboard HDMI port before trying to boot the computer. The video wouldn't register if we had the HDMI cable connected to the motherboard, and then switched it to the graphics card.

Turns out, with our configuration, the motherboard doesn't output video. I didn't get a chance to verify whether BIOS check passed without a keyboard/mouse plugged in when plugged into the graphics card.

Here's a couple photos of what our computer looks like, incorporated into our living room decor: 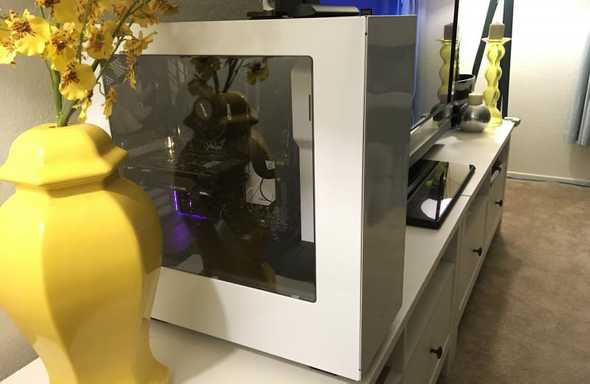 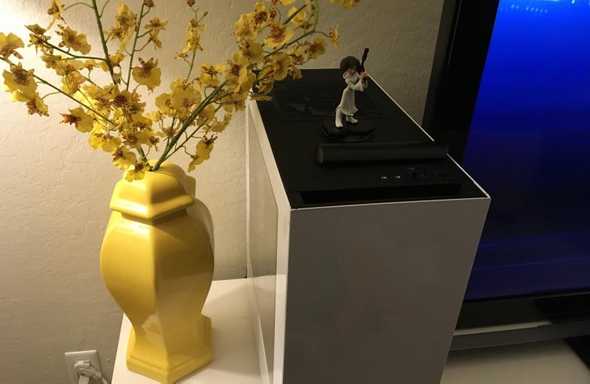 Yes, that's Princess Leia guarding the computer. Now we're just trying not to grow a roster of Steam games that will become impossible to finish! Cuphead is getting a lot of time!